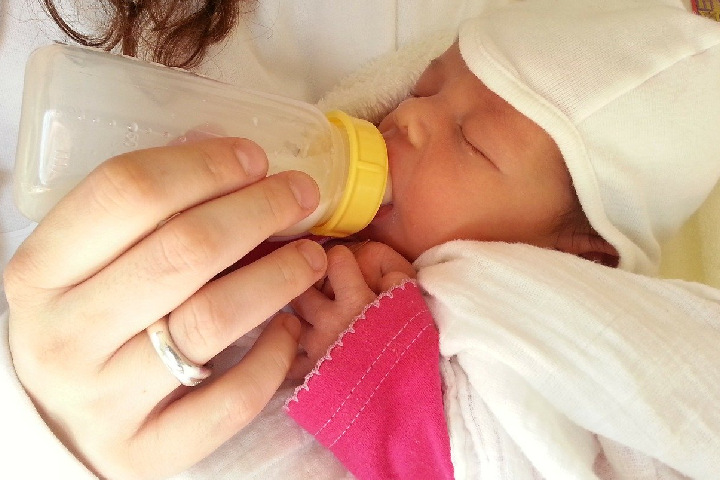 Food: Starting complementary feeding at six months is not a nutritional need, nor is it giving up breast milk. It is learning to catch and swallow.

But, above all, it is that he enjoys the flavours and textures by himself. Why do we give babies other foods in addition to the breast after six months?

Some believe that, at a certain age, breast milk is no longer enough, no longer nourishes, is watery, or disappears. But it is not valid.

1. Milk Has All the Nutritional Properties

It is not that the baby is forced to eat other things because there is less milk, but the other way around: as the baby eats more and more of different things, he will nurse less and less, and the mother will make less and less milk.

Nor does milk lose quality; on the contrary, with the months and years, the number of fat increases and calories. If it has about 70 calories per 100 grams at the beginning, after the year, it has 80 and continues to rise until 85 and 90; maybe more in some women.

Milk production is self-regulating and adapts at all times to the baby’s needs.

Against this, many of the foods we give to babies are low in calories: fruits have about 50 or 60 calories and vegetables between 10 and 30—also, all, one and the other, without fat and with low protein biological value.

It is also not true that breast milk cannot provide all the nutrients that a growing baby needs. Milk has plenty of protein, plenty of calcium, plenty of vitamin C

The only thing that some children (but not all) may be lacking after six months is iron. Also, zinc may be necessary, although we do not usually zinc worry, even pills sold in pharmacies.

So do we give children other foods, so they have enough iron? Partly yes, but it is only a very secondary concern.

If the big issue were iron, we would only give them breast milk and foods that contain iron; Why provide them with fruit, rice, or macaroni, which hardly have iron?

And why risk something as unpredictable as food rich in iron being able to give you drops of metal, much more practical and comfortable?

The main reason for giving babies other foods is not nutritional, but learning

It is not that you need fruit or vegetables or cereals to be well fed. What we want is for him to get used to regularly eating because he cannot breastfeed his whole life.

3. The Objective is to Learn

What does it mean to eat healthily? Well, just like their parents eat. But what we eat is a healthy diet? It’s supposed to be like that, and if it is not, find out and change your diet.

We have to eat healthy for our own sake and that of our child because otherwise, the bad example we set with our diet will be more powerful than any purely theoretical attempt to teach him to eat healthily.

So, based on the fact that you already eat healthily, there are a thousand different ways to do it, the diet of each family depends on their traditions and preferences. Now you have to consider your medium and long-term goals:

You have to set your ultimate goal, know where you want to go, and then move in that direction.

Because the baby who grabs a noodle or half a meatball with his little fingers and puts it in his mouth moves on the right path, in a few days, he may even swallow the noodle, and later he will eat three or four. 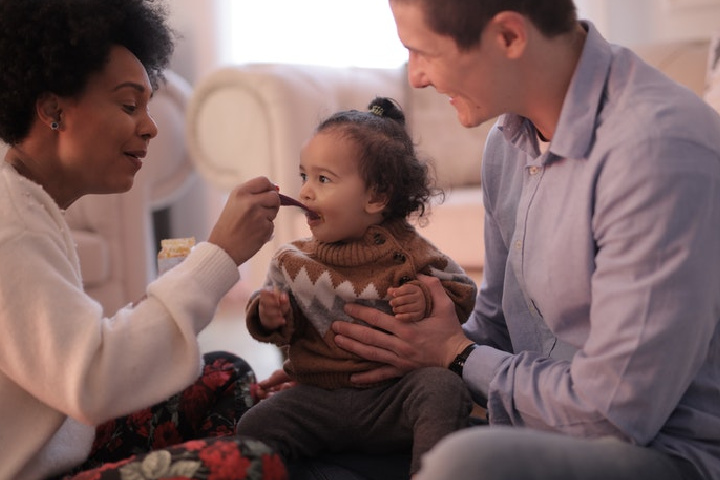 And since you are only going to eat three noodles or five lentils, you will drink a lot of breast milk, with its calcium and vitamins and proteins, and you will be well nourished.

On the other hand, whoever swallows a vegetable puree or a milk bottle with cereals by distracting him, deceiving him and forcing him, does not learn anything.

Every time we see more children of two and a half or three years who do not chew anything, who do not eat healthy food, only eat crushed (and sometimes in a bottle).

everyone ends up eating, of course; But what would have been a joyous discovery at six or nine months ends up being a long family conflict at three or four years.

And on top of that, the baby with a belly full of low-calorie porridge will not drink milk and be less nourished. 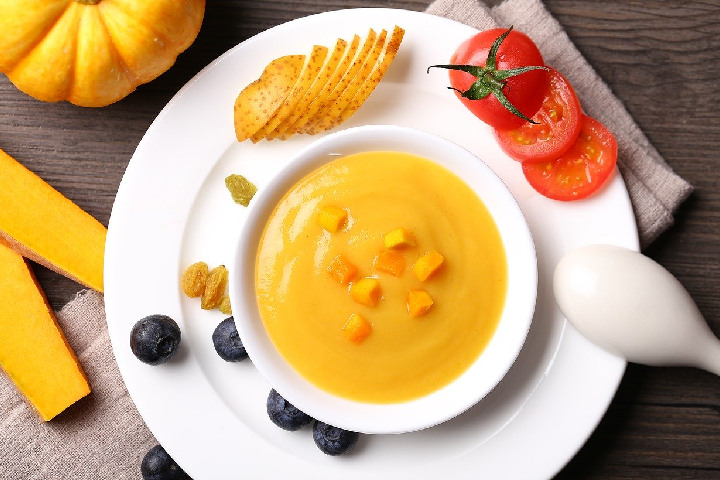 But the worrying thing is that you are learning that eating is unpleasant. More than one mother explains that her son “sees the spoon and starts crying.”

Babies who put the keys, the remote control, and even the soil in the pots to their mouths cry just to see a spoon. What experiences have you had to have reached this situation?

The worrying thing is that if you do not learn to eat pleasantly, you may think that it is torment.

If you are not sure where to start, eat with your baby at the table. Many mothers and fathers do it with their child on their lap, mostly because if they try to leave it anywhere, it starts crying and won’t let them eat.

And this is usually how the baby tries, sooner or later, to grab something of what his parents have on the plate. At first, she is probably not hungry or wants to eat it; she merely puts it in her mouth, as she does with everything else.

5. With Time and Patience

Exclusive breastfeeding is recommended for up to six months. But if a little earlier, between four and six, it is the child himself who insists on putting something in his mouth, it is not necessary to prevent it.

Overall, chances are he won’t even swallow it.

After six months, we already began to throw hints, to put selected pieces of food within reach. Above all, it is a matter of patience and respect. And that he is allowed to play “dirty” the food a little.

It is not a question of being given the porridge that “is his turn” because he does not need more food than he wants and can be put in his mouth.

At first, he will eat very little to nothing; but little by little, it will take more and more.

Learning to eat alone is a process that will not last a few days, but a few months.

This way of starting to eat still surprises and mistrusts many parents. So look online for the expression of baby-led weaning (supplementary feeding on demand).

You will see month-old babies calmly and happily eating healthy food with their bare hands.

Nowadays, it is recommended to introduce gluten before seven months, since it has been seen that doing it too late is not good either. That is, it may well be that the first thing a baby eats in his life is a piece of bread.

According to experts, delaying egg, fish, or dairy has not been shown to prevent allergies. They could be given at six months, but I think he is not in a hurry either. As it will not start with everything at once, fish, eggs, and dairy are better “later,” although I do not know if at eight months or eleven.

Infants who breastfeed do not need any other milk or derivatives. And those who take artificial lactation should take only adapted milk until they are one year old. Another thing is that if the child sees grandma’s gutters with bechamel and asks for them, she can try a teaspoon. But the basis of their diet must be either breast milk or adapted.

When breastfeeding infants start drinking water, they should use glass from day one. And those who take artificial lactation, it is convenient that, from six months, some of the feedings be with a drink to learn and can eliminate the bottles a year. 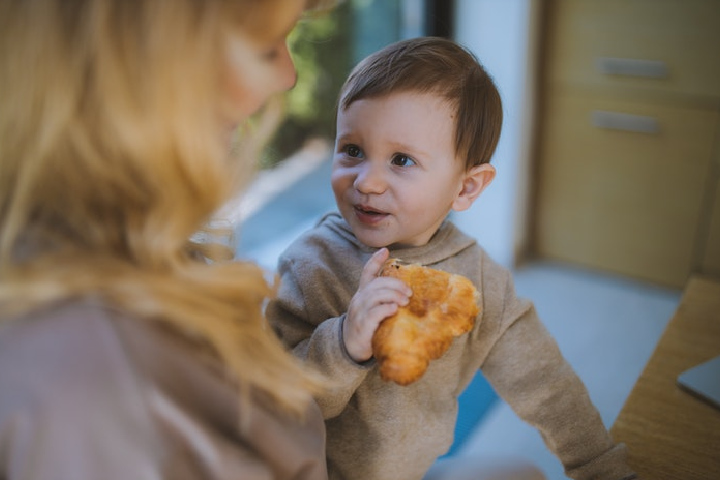 7. What if He Chokes at First?

It is impossible to learn to eat without ever choking. “Choking” means that it is difficult to swallow, that the food is left halfway.

In that case, you will have a cough or nausea, take or finish drinking what is in your mouth, and continue eating. It does not matter anymore.

The danger of drowning or suffocation is that food goes into the lung. This happens especially with hard and rounded foods (peanuts, hazelnuts ).

They must be rigorously avoided for up to three years or more, just as necessary to prevent playing with small pieces.

You have to be present when the child eats, cut, or crush foods that are too big or hard and put aside those that present a danger.

And, above all, it is essential not to force him to eat, in addition to everything said, so that he does not have food in his mouth if he cries. Nor if he is either laughing or distracted.

An Egg A Day Does Not Raise Cholesterol: It Is Scientifically Proven

Energy Kicks Without Caffeine – This Is How You Wake Up In The Morning!

Want To Know Whether Gluten Cause Blemished Skin?